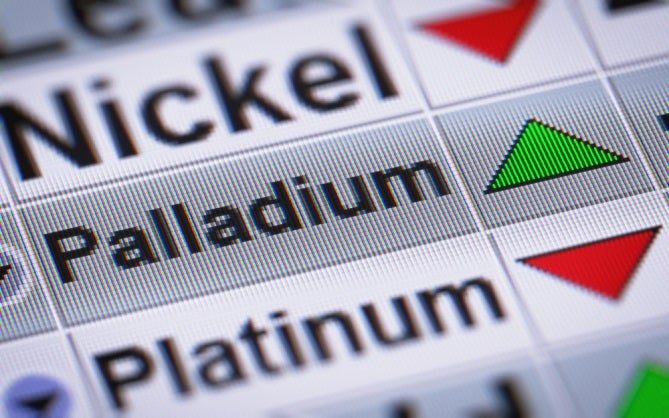 Copper is often referred to as "Dr. Copper" for its ability to foreshadow moves in other markets and the global economy in general. Today we coin the term "Mr. Palladium", as this particular metal may be offering its own bit of foreshadowing. And what might that be? Perhaps the end of the entire LBMA/COMEX Digital Derivative and Fractional Reserve Pricing Scheme.

You may recall that we first wrote about this back in October, when palladium prices were near $1100 per ounce and threatening to break out to new all-time highs. Please take a moment to review this link now: https://www.sprottmoney.com/Blog/watching-palladiu...

In the six weeks since, price has indeed broken out with new daily, weekly and monthly highs painted onto the charts. See below:

And what forces are driving this spike in price? Apparently it's a good, old-fashioned physical supply squeeze. How do we know this? First, see the backwardation of the futures board. Instead of a normal contango configuration, note that the spot price of palladium exceeds the current delivery month, and these prices in turn exceed each successive futures contract. Backwardation in futures is usually your first sign of a supply squeeze, as immediate delivery is sought.

Next, check this information from Canadian analyst David Jensen, who has been following this situation for months. On Tuesday, he reported that lease rates for palladium bars in London have moved past 20%! Historically, these rates are close to zero, as you can see below on this chart we included in our previous post back in October.

So by any traditional measure, the market is telling you of physical supply shortages, particularly in London, where the LBMA manages a physical palladium market with the same fraudulent tools of unallocated accounts, forward contracts and leases that they use in their gold and silver markets. Thus, could a supply squeeze in palladium lead to an exposure and recognition of the LBMA's confidence scheme in general? Put more simply, could a break of the LBMA palladium market lead to the demise of the LBMA gold and silver markets too?

Back in 2001, when price first spiked to $1100, a similar supply squeeze was averted through a sudden physical bailout from Russia... a country which produces about 40% of the annual palladium mine supply. Russian President Yeltsin, eager to appease and court the west, rode to the rescue and effectively "bailed out" the LBMA before a meltdown could occur. Given the current geo-political landscape , it's doubtful that current Russian President Putin will be so accommodative.

Without a sudden fresh supply of deliverable palladium, what's to stop this ongoing squeeze and spike? Surely the Banks that operate on COMEX will attempt to defend their short position by utilizing the same tools they use to manage the prices of gold and silver. See the latest Commitment of Traders data below and note the same prevailing structure as historically found in COMEX gold and silver.

However, a true physical supply squeeze will overrun even the seemingly infinite amount of digital palladium that these banks can create. At what point will The Banks be forced to capitulate? Would the CME issue a "liquidation only" order, as they did in COMEX silver in 1980? But if they attempted this in the face of a true physical shortage, the CME would risk a complete dislocation of the physical and derivative price. The current $110 in backwardation would multiply to the point where the futures price becomes entirely insignificant.

So we'll wait to see what happens next. As a precious metals investor, it's easy to be cynical at this point and assume that nothing will come of this. Maybe The Banks will be successful in rigging price back down, and a falling price might alleviate the physical supply squeeze. Maybe. In fact, at this point, that's probably the most likely outcome.

However, if Mr. Palladium continues to rally from here, a very real threat to the LBMA/COMEX Fractional Reserve and Digital Derivative Pricing Scheme will emerge. Physical gold shortages created an inability to manage price, and this led to the inevitable demise of The London Gold Pool in 1968. A true global palladium shortage that forces the hand of The Banks and exposes their schemes to the light of day could be the first step to ending the ongoing LBMA/COMEX Gold Pool fifty years later.

Carma cam elon
Reply
They will just blame the.." evil speculators" that lost TRUST in the crooked bankers, probably the Russians did it meme. Ignoring the FACT, that this scam was started by MR. Rothchild/red sheild / centuries ago. Next will be Platinum, that is used in real things and much rarer than gold and harder to mine, and Russia and South Africa has the largest reserves. BREXIT is the perfect shape goat for nullifying the whole L::MBA scam and notice how this co insides wide 90 day ...pause with the TRADE war... It will NOT be a currency war, but a Commodity war...No silver...NO I phone...No litium..NO batteries.... The west is about to learn all about..CARMA and the ART of WAR vs the ART of NO deal.
Reply
Leave a Comment