Why Economists With History Books Like Gold - Peter Diekmeyer (May 4, 2020) 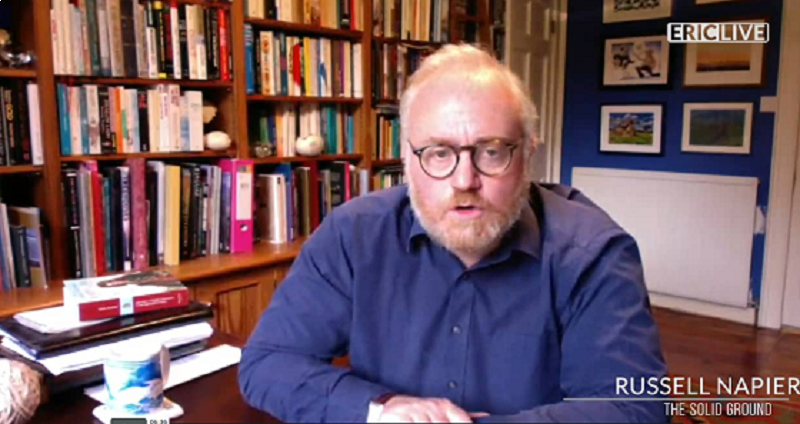 Russell Napier looks like a typical economist. The co-founder of Electronic Research Interchange is cerebral, erudite, and works in an office with books piled to the ceiling.

A closer look reveals that those books tend to encompass a broad range of subjects and were written long ago.

This has a direct effect on investors. According to CPM Group, a research firm, gold holdings as a percentage of total private financial assets remain less than 1%.

Napier isn’t the only financial advisor whose vast private reading coincides with an interest in sound money.

Recent podcasts featuring forecasters*—ranging from Peter Schiff to Kiril Sokoloff and many others—reveal a strong tendency of those with large bookshelves in their private offices to own gold and bitcoin.

Napier’s grounding in history provides him with unique tools to analyze the COVID-19 crisis and the ensuing government shutdowns of significant parts of the global economy.

“We are in a completely different environment,” says Napier. “Unlike previous recessions, in which businesses’ financial positions deteriorated gradually, we are going to see credit defaults almost immediately.”

Those defaults are taking place at the nation-state level as well, particularly among countries that are unable to print money to finance U.S. dollar denominated debt. Argentina recently missed a key payment and is threatening to default outright. Lebanon’s currency recently lost half its value.

The drastic actions that Western countries are taking to bail out their respective economies will leave them in terrible financial positions once the crisis begins to abate. Digging out of that hole won’t be easy.

Napier expects governments to resort to increasingly severe financial repression, which he describes in black humor as “stealing money from seniors slowly". These would include freezing the interest rates that individuals and pension plans earn on retirement savings.

Napier cites the United Kingdom, which managed to reduce its debts by 90% in real terms in the decades after World War II by slowly and steadily robbing savers. The United States enacted similar policies with similar effects.

The French government for its part opted to confiscate money from seniors quickly after the war by capping interest on its debt payments at 6% and running inflation at rates approaching 50%.

Napier cautions that future financial repression will be much tougher than efforts during the past decade, which increased central balance sheets but failed to push the cash out into the system.

Coming measures will include the gradual implementation of capital controls, such as the Chinese government’s restrictions on cash outflows, and a retaliatory restriction that U.S. President Donald Trump recently floated on U.S. pension funds investing in China.

Learning in the “Library of Mistakes”

Napier has been warning governments for decades that excess borrowing and spending practices were ineffective. But those efforts were in vain.

Fed up, six years ago he decided to help correct the economics profession’s lack of historical knowledge by helping to set up a library in Edinburgh to promote the study of financial history.

Today the city’s “Library of Mistakes” includes a selection of books on economic theory and analysis, financial markets, and corporate history—chosen to enable students to avoid falling into the traps that previous generations stumbled into.

“In recent years financial education has focused on the power of the equation to explain economic and financial forces,” says Napier. “This distillation of complex forces into faux objectivity has created dangerous errors in financial understanding.”

Individual investors have a big advantage

The good news is that rot at the highest levels of the global financial system has opened considerable opportunity.

“Individuals have a big advantage over institutions because they don’t face the constraints,” says Napier. “One of these is the ability to invest in gold, which is the only asset that is not simultaneously someone else’s liability.”

Keeping assets outside of the financial system—where it is harder to regulate or seize them—is also useful, as is finding more stable foreign jurisdictions such as Switzerland and Singapore to store emergency funds, says Napier.

However, the biggest hurdle that today’s investors face remains the dreadful financial educations (or lack thereof) that most Americans and Canadians receive in high schools and universities.

This can be seen in the startling tendency of advisors with bare walls in their offices to recommend whatever investments their friends are buying.

For them, a visit to the Library of Mistakes could generate the most lucrative payback of all.