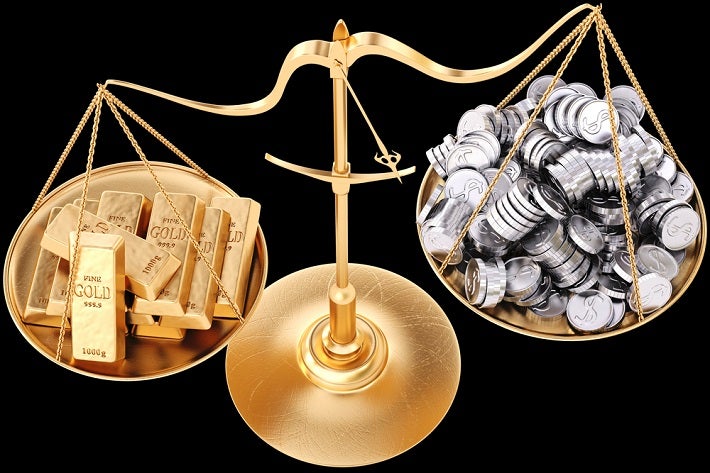 The reversal in metals and miners continues. It may go on for some time yet. There is no change to the possible targets provided last week except to add that we could see a double bottom in both Gold and Silver at 1466 and 16.50 respectively.

With this in mind, I thought I would take this opportunity to once again provide the reasons why I am buying and holding precious metals long-term.

Signs are everywhere that they’re going to take off. The latest is Germany cracking down on gold ownership by requiring identification to buy even ½ an ounce of gold under the guise (again) of preventing money laundering, even though all evidence shows that precious metals are rarely, if ever, used in such activity.

The principle reasons why I am convinced that Gold and Silver are going much, much higher have not changed in the past few years and are as follows…

Global central bank purchases and repatriation of Gold is at its highest levels in over fifty years. The stewards of global monetary policy are loading up on gold at an accelerating rate. Why? Why now? What do they know? Whatever the rationale, actions speak louder than words and we should all follow the smart money.

China and Russia are leading the charge. Russia has the highest Gold-to-GDP ratio in the world, more than double that of the United States. China says it has ~2k tonnes, less than that of Russia, but this number is likely understated many times over. China is the biggest producer of Gold, over 400 tonnes a year; it doesn’t export an ounce; and it has been one of, if not the biggest buyer of gold and gold mines in the world for over ten years now. I believe they’re both anticipating the demise of the dollar as the global reserve currency and are preparing for it well in advance. “He who owns the Gold sets the rules.”

The U.S. debt-to-GDP ratio is over 100%, which puts it in a similar category to the likes of Greece and Italy. However, when you include “unfunded liabilities” such as Social Security and Medicare, the number is north of 1000%. This is based on numbers from the U.S. Congressional Budget Office, or CBO. These unfunded liabilities start to come due in a big way this year. With the U.S. already spending like a drunken sailor and budget deficits exploding, the fear is that the Federal Reserve will be forced to monetize the debt, i.e., simply print dollars out of thin air and buy U.S. government debt [CA1] . This is akin to how Weimar Germany paid for its war debts post World War 1, and we all know how that turned out. Such an environment would send Gold through the stratosphere. The Fed has already started this process with QE4, also known as “Not QE”, and it is only a matter of time before we get QE for the People, MMT, or Helicopter Money, whatever you want to call it. Said differently, it is only a matter of time before the dollar’s reign as the global reserve currency comes to an end, and that time is running out.

As for Silver, JP Morgan is sitting on a massive mountain of physical Silver that it has accumulated since 2011 and which it continues to add to. Bankers don’t get out of bed in the morning unless they plan to make a profit, and neither does one of the biggest banks in the world. When Gold soars, Silver will explode even higher, in my opinion, and JP Morgan knows this too.

Lastly, what alternative is there? Gold and Silver are still undervalued by historical standards. Whereas stocks and bonds are hopelessly overvalued by comparison and cash itself is already being printed into oblivion.

Whether the rationale is rampant inflation or stagflation, loss of faith in the dollar and fiat currencies in general, a global monetary reset associated with a worldwide financial and economic collapse, or that there is simply no other safe harbor long-term, Gold and Silver are just getting started on the upside, in my humble opinion.

In the meantime, we’re just waiting for the next low for a potentially explosive rally to follow. The only caveat to such a spectacular surge higher in metals and miners next is a crash in stocks first. I’ve warned in the past about the risk of a 2008-style correction due to a spike in real yields, which in turn was due to a crash in stocks. Absent that, I am only looking up.