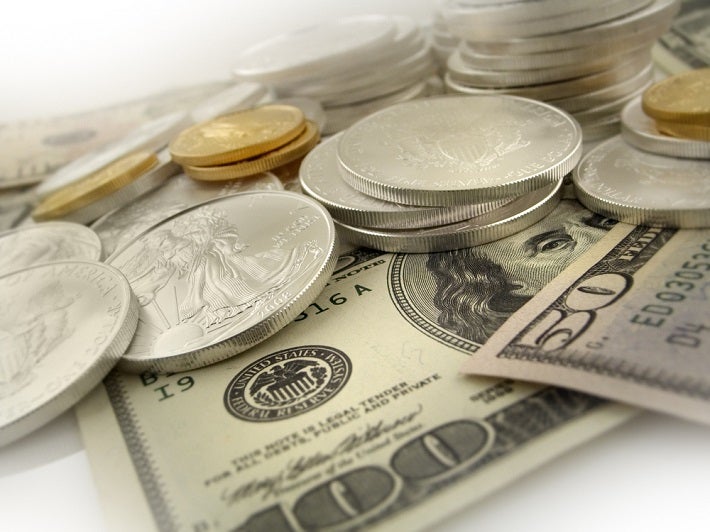 Terry Goodkind wrote an epic fantasy series. The first book in the series is entitled Wizard’s First Rule. We recommend the book highly, if you’re into that sort of thing. However, for purposes of this essay, the important part is the rule itself:

Does this not aptly describe the belief that the dollar will lose its reserve status, will collapse relative to other paper currencies, and is facing imminent hyperinflation with a skyrocketing gold price?

Both motivators apply here. The gold community wants to believe it, because that means that gold will go up. To $10,000 or as that speaker at FreedomFest 2017 confidently predicted: $65,000. Everyone with a few gold Eagles in his sock drawer will be rich. And those who put a few hundred thousand bucks into gold will be Seriously Rich. A real Fat Cat! Like with Ferraris, and chauffeur-driven Rolls Royces, and everything.

Never mind that if the dollar collapses, $65,000 won’t be worth much. This will be the dollar going down, not gold going up. Never mind that in a world where everyone is impoverished to that degree, you would not dare to drive your Ferrari even if you owned one. Tune in to the chaos going on in Caracas, Venezuela for a picture of this problem.

Many people’s heads are full of this stuff, yet they think it’s all true.

The other motivator is fear. Some of the people who want collapse to be true, also fear it. And many more fear it to be true. The fear gives reality to the idea.

Our view, at Monetary Metals, is that the dollar will collapse—last. And that there are several good kicks left in that can. There is no imminent threat of collapse of the dollar. The Swiss franc, as we have written about for several weeks, is much closer to collapse. And even that may not be imminent.

The world has not experienced this disease before. No one knows how long it takes to progress through the corpus economic. We are only studying the numerous pathologies one at a time so far. And we invite others to join the field of scientific inquiry. You need only some passion, some time, and a willingness to discard all that stuff which isn’t so, like quantity theory of money.

One might ask, “OK Keith, what’s your purpose in writing this?”

We write this because the world does face a grave problem. It is serious, but most people don’t take it seriously. In part because of “gold is going to $65,000!”

But they had better start taking it seriously, if we are to solve it while there is still some time. We need a transition to the gold standard, not to try to encourage another speculative bubble.

This Report was written from London. Also visiting Vienna, Madrid, Zurich, Hong Kong, Singapore, Sydney, and Auckland. If you would like to meet, please contact us.

The price of gold was unchanged, while that of silver rose 8 cents. Of course that doesn’t tell the story of the price drop on Monday and Wednesday, with the 50-cent gain on Friday.

That old idea that a country can just declare its heretofore-irredeemable currency to be gold backed lives on. Alasdair Macleod posted this article on Friday. We won’t reiterate our comments about the impossibility of such a price-fixing scheme, which is what it would be, as we covered it last week .

We do want to comment on a few additional ideas presented in the article.

“Assuming China has significant undeclared gold reserves, this could be done very simply through the issuance of a perpetual jumbo bond, paying coupons in gold or yuan at the holder’s option.”

To see the issue here, think of yourself, borrowing money, let’s say for a house. Now frame it the way China gold bonds are framed above. You can take out a mortgage, assuming you have significant dollar reserves…

But no one borrows in order that he might drain his cash reserves. One borrows to buy an asset. And one pays the loan, not by cash in inventory—stocks—but by income earned during the life of the loan—flows.

To get a mortgage you need a salary, not a pallet full of twenty dollar bills in the basement.

“For China, a gold-exchange yuan standard is now the only way out. She will also need to firmly deny what Western universities have been teaching her brightest students.”

A proper gold standard is the only way out for the world! China included!

But the problem here is that few deny what they learned in school, and usually the brightest are the least willing. Paying interest on gold is Monetary Metals’ business. We are in a position better than anyone in the world to know what prospective gold bond issuers are thinking.

Keith has met with many legislators, treasurers, controllers, and others both at the state and federal level in the US, at the policy think tanks, and in a number of countries abroad. We wish to be wrong in saying this, but no one wants the gold standard. If they are interested in issuing gold bonds, it is not for reasons of solving any kind of global monetary problem.

One may as well say that Philippines will legalize drugs, as to say any government in the world today wants the gold standard. They don’t, full stop. And they have no incentive to do so.

Again, we fervently wish it were otherwise.

Next, there is this:

“…fiat currencies losing their purchasing power at an accelerating pace.”

Everyone—central banking friend and foe alike—thinks this way. This formulation lets the central banks and their irredeemable currencies off the hook! Even with the relentless rise of non-monetary factors pushing up costs and prices (e.g. taxes, regulations, labor law, environmental controls, zoning, permitting, litigation, etc.) prices are not skyrocketing.

At best, this presumes what we must prove. That, one day, prices will hyperinflate. But at the moment, very few people would agree that hyperinflation is a concern. Especially in governments and central banks.

And finally, the cash value of this argument is spelled out:

On a serious note, we would not put our worthless fiat irredeemable printing press paper dollars in harm’s way betting on this price or a Chinese gold backed currency.

Next, this is a graph of the gold price measured in silver, otherwise known as the gold to silver ratio (see here for an explanation of bid and offer prices for the ratio). It fell slightly this week.

As we noted last week, there is a steady rise in the cobasis. Gold is becoming scarcer. Even as its price is firming up.

Now this week, even with a rise in price, we see a rise in scarcity of this metal too.