Gold Sector Counting Down to Launch

Given that next to nothing has happened in Gold or Silver in the past several weeks, I am going to provide quick updates on the DXY, real and nominal bond yields, and the S&P. These markets are many, many times bigger than the precious metals markets and to varying degrees have a great deal of influence on the prospects for Gold and Silver.

Historically, the dollar is the antithesis of Gold because Gold is the anti-dollar: it exposes the true devaluation of the greenback. Said simply, when the dollar rises, Gold falls, and vice-versa. However, more recently, they have tended to rise and fall together more often, so it is less of an indicator than it was in the past. This is because the dollar is being rapidly devalued by inflation and yet it continues to appreciate relative to other currencies, such as the euro and the yen, because they are being devalued at a faster pace than the dollar. Gold rises too as all fiat currencies are being devalued. With that said, if we see a dramatic dump in the dollar, Gold will very likely go skyward. 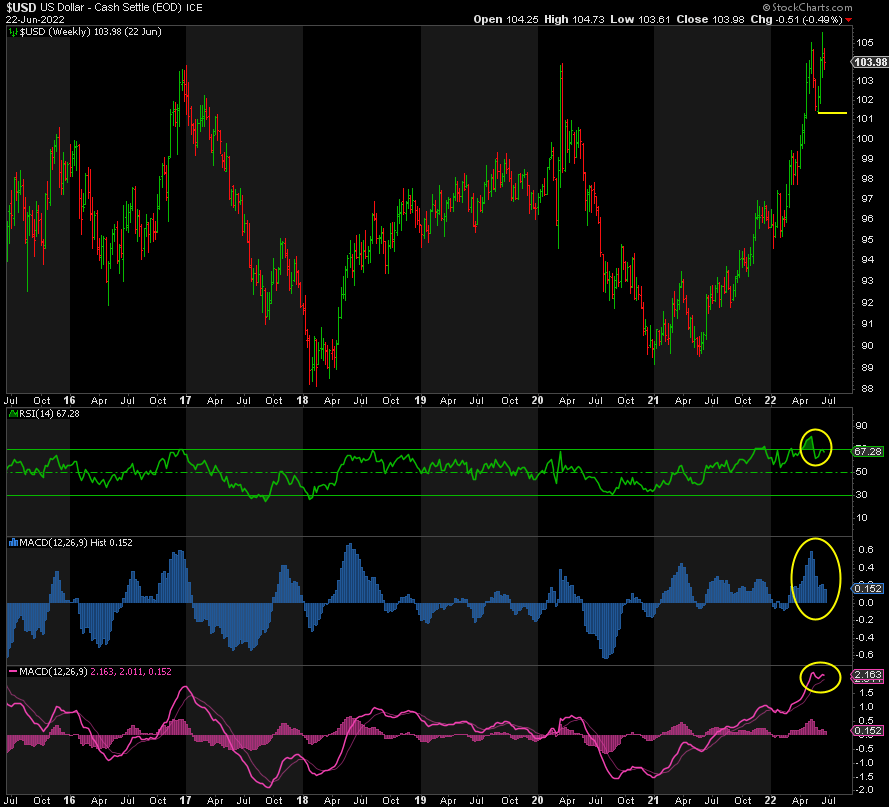 The dollar has had a great run since its low of 89 in January 2021. But now it has set a negatively divergent higher highs across all indicators. It is also extreme bullish. Just look at all of those tweets calling for 120 next. That said, little of this matters if the DXY doesn’t break support at its prior low of 101.42 with follow through below 100. If and when that happens, my forecast for sub 90 levels increases in probability. Until then, 120 remains a possibility. I’m leaning towards a break down in the dollar across the board if and when the Fed reverses course next. When the dollar does peak and dump, Gold and Silver will likely resume their inverse correlation to the dollar and shoot higher. 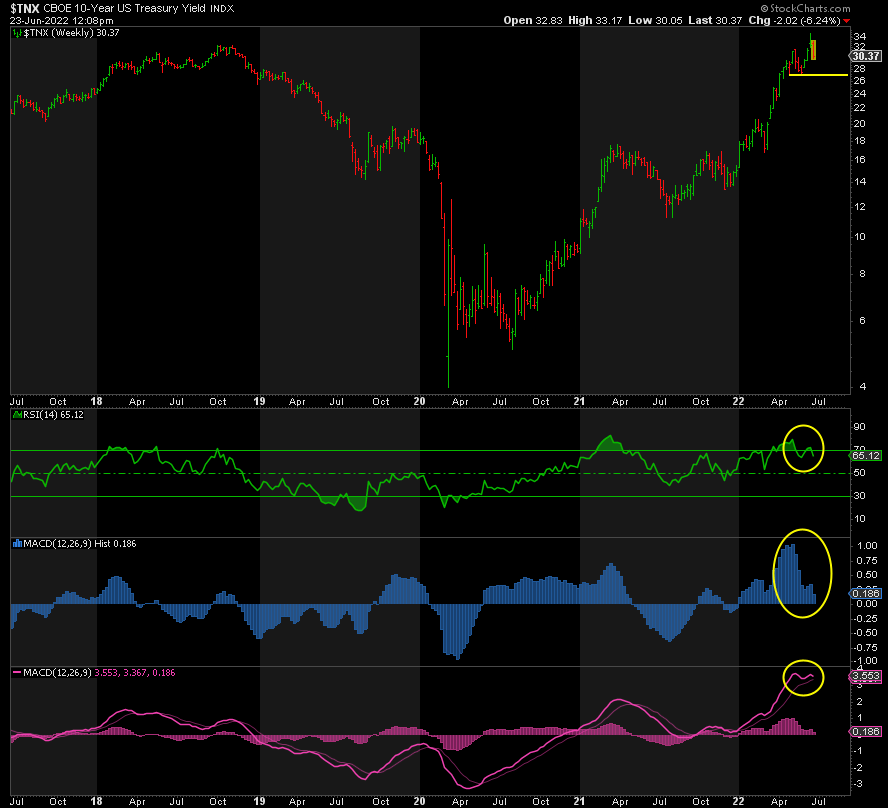 It should come as no surprise that the chart of the 10-Year Bond Yield looks remarkably like the DXY chart. Higher bond yields have been extremely supportive of the dollar, especially relative the yields in other currencies. As I tweeted a month ago, the bond market has broken its 30-year downtrend, despite the naysayers to the contrary: 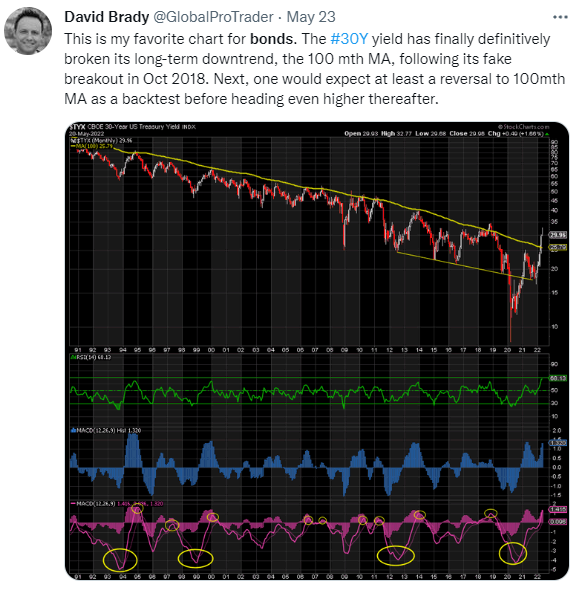 But now the 10-Year has it a negatively divergent higher high across all indicators, just like the DXY. However, it has not broken support on the downside yet, again similar to the DXY. They clearly have a symbiotic relationship these days. In order for confirmation that peak in yields is in place, we need to break 2.70% on the downside. Until then, the risk of higher highs remains. Should yields continue lower and break 2.70%, the DXY will likely follow suit, and watch Gold and Silver take off imho. 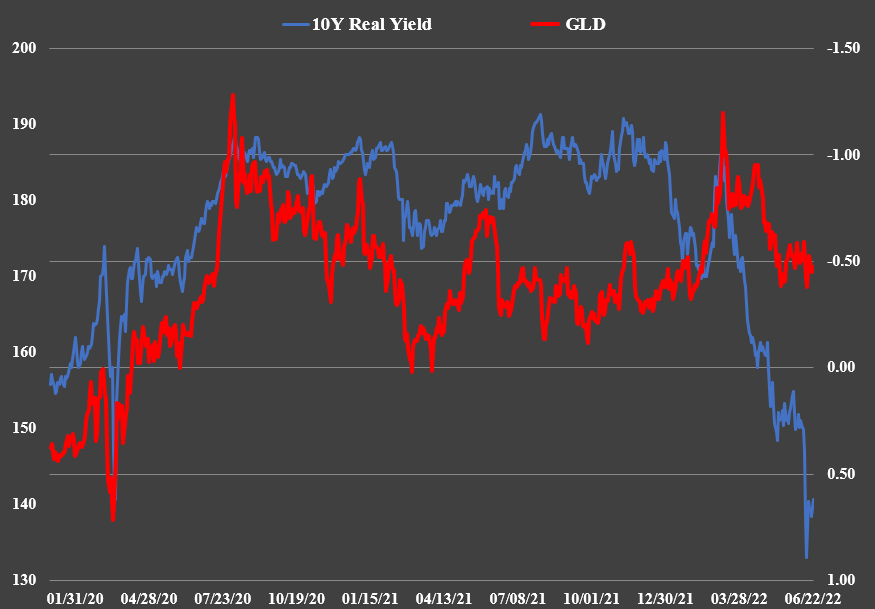 The chart above shows the 10-Year real yield in blue and Gold in red. The real yield is inverted on the right axis to illustrate the inverse correlation between the two. Note how the real yield risen to a level that exceeds that in March 2020 and yet Gold has not followed it lower. This tells me several things. Gold is extremely resilient and is getting ready for take off. Either Gold has to catch down to real yields or real yields have to fall to catch up to Gold. Given that real yields almost reached 1% and at their highest level in years, I’m leaning to the real yields play catch up to Gold. When that happens, Gold goes vertical imho and the rest of the sector follows Gold and swiftly passes it by.

Couple all of this with the extremely bullish COT positioning data and it becomes clear that the entire precious metals sector is getting ready to explode higher. The only caveat to that scenario is that the Fed does not capitulate on its tightening policies but triggers a systemic collapse of the Everything Bubble sooner rather than later. I place a very low probability of that occurring at this time. It’s only a matter of when Gold et al complete their 10 second count to launch and I believe we’re around 2 here.