Time is Running Out for the Banks 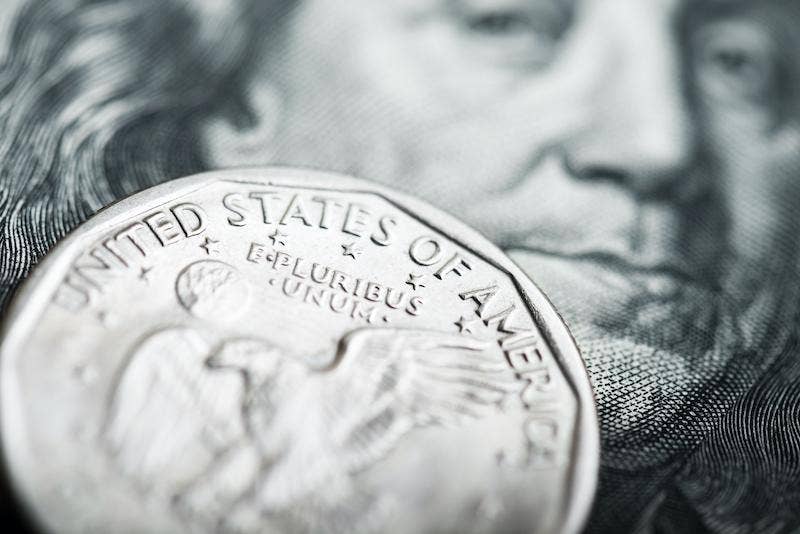 Unfortunately, this week I have little to add to what I shared last week. We have not broken any major resistance or support levels, i.e., we have gone more or less nowhere. Gold is the perfect example. Resistance at 1815-1820 remains intact. Support at 1750 has yet to be tested. What has changed is the increasing level of frustration due to the near year-long drop from the 2020 peaks and the consistent failed attempts to move higher compared to the ease with which supports are broken in the space of days. The drop from 1920 on June 1 to 1750 on June 29 says it all. All while real yields fall back below -1.00% which should be beneficial to Gold and Silver. If that were not bad enough, the miners are being hit even harder. Consequently, and understandably, many investors in this space are ready to throw in the towel. As I shared earlier on Twitter:

This brings me to role of the Bullion Banks and how Basel III plays into this. Bankers are only interested in profits, full stop. The Banks are still short Gold and Silver so they don’t want these metals rising until they can exit their shorts and, if possible, get long ahead of the coming rally. Can these so-called Bullion Banks push prices lower in order to be able to close their shorts at a profit and actually become long? In the derivatives market, i.e. futures, forwards, and options, the answer is yes. How? They are the market makers and can create almost unlimited contracts out of thin air and dump them onto the market to force the price lower. Then they let momentum take over as longs are stomped out and support levels are broken.

The market enters a bearish phase as money market funds and retail holders throw in the towel. Then the banks step in to buy back the contracts they’re short at a profit. This is why when you look at COT Reports on their positioning going back to 2006, you can clearly see that the Swaps and Commercials are almost always peak short at the peak in price and peak long at the trough in price. The so-called dumb money, the Large Hedge Funds and Small Speculators, aka retail, tend to hold the exact opposite positions at the peaks and troughs in metals. In other words, the banks are always right and the dumb money is always wrong.

This is statistically impossible yet a cursory glance at the COT Reports clearly shows this to be true. So, what does this mean for Gold and Silver going forward? It means that we’re unlikely to see the next substantial rally take hold in the precious metals until the Banks are either neutral or long, or open interest is at multi-year lows (Banks exiting the derivatives market altogether), or we see the end of the Comex and possibly the LBMA, and the price of precious metals is solely driven by physical supply and demand dynamics. The latter may never happen or will take some time but the former is not too far away, namely, the banks becoming neutral or long Gold and Silver.

Switching to Basel III, I wrote an article back in March on how this benefits Gold and Silver medium-term and long-term. Suffice to say here that it does not make it impossible for the Banks to continue to short Gold and Silver, but it does make it far less lucrative given the rise in the cost of leveraging Gold shorts and how it impacts their capital ratios given that Gold in particular has been declared a Tier-1 asset class alongside cash and government bonds.

Many traders and investors expected these new regulations to immediately cause Gold and Silver prices to take off but they obviously missed two key points. The first being that the banks are still short. Second, the rollout of Basel III has three stages. The first was in Europe on June 28. The second in the US on July 1. But the third does not occur until January 1, 2022, in London, where the LBMA is located. This provides the banks six months to manage their way out of their short positions and get long for the rally to come in precious metals.

What do I mean by rally? Gains akin to those in the rallies from 1974-1980 and 2000-2011, perhaps more so, over the coming years. It may take less than six months and the Great Reset on November 2nd may accelerate the process. But until the Banks are at least neutral, it will be difficult for Gold and Silver to realize its potential for far, far higher prices. There is one caveat to this. JP Morgan is already massively long physical Silver and the Central Banks continue to buy physical Gold. In other words, the smart money is loading up for a massive rally in both. However, what if they choose to forego the other banks and allow them to incur massive losses and free precious metals to take off sooner. While improbable, it is possible. Suffice to say, by 2022 at the latest, I expect Gold and Silver to reach new record highs in price and possibly much higher. JP Morgan and the Central Banks already know this and are either already prepared and/or preparing for this. In my humble opinion, so should you. As I’ve been saying since 2016, ‘Follow the Smart Money’.

With this in mind, let’s revert back to the current and increasingly bearish sentiment in precious metals. I’ve shared the chart below before, but it bears revisiting as many people suffer short-term memory loss, especially when their positions are under water. It’s basically this, all significant rallies tend to follow significant drops in price. 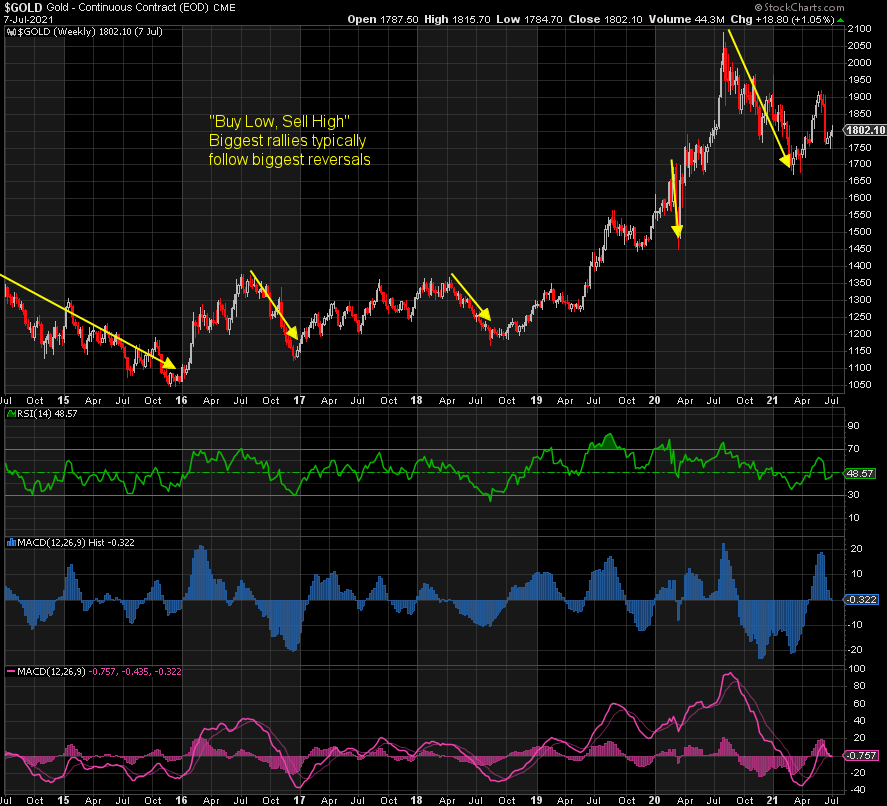 This time is no different. Could we go lower ahead of the next major rally? Of course. But the rally to follow is inevitable imho, especially if the Fed and the US Treasury are forced to print and spend even more trillions of dollars in the coming months and continually into 2022 ahead of the US midterm elections. By then, Basel III will have been fully implemented and the Bullion Banks are most likely to be long derivatives of the metals or the physical metals themselves, or both. All of the weak hands will have been squeezed out to ensure that only the few benefit from the handsome gains ahead. Coupled with a possible global monetary system reset, the gains could be spectacular.

This is why I recommend you own at least “some” precious metals that you can afford to stick in a drawer and allow to collect dust. While I am not a fan of day trading, if you want to attempt to buy ahead of a significant move higher, I recommend you do so on a break of resistance and place a stop below that resistance should it prove to be a false dawn. For example, if we break 1820, place a stop just below 1800 with an initial target equal to or greater than your potential loss. In this case it would at least 1840-50 on the upside. If it does fall below 1800 again, take your loss and wait for the next opportunity. By contrast, if it does hit 1840-50, you can choose to take 50% profit and then use a trailing stop for the remainder. In other words, if it breaks 1850 resistance, raise your prior stop just below 1800 to 1830. If Gold then breaks 1920 resistance, bring your stop up to just below 1900. Then if it falls below 1900, take your profits, and then wait for the next opportunity. The rationale behind this methodology is that you limit your losses and they may outnumber your profitable trades in number. But if you catch a strong trend higher and use the trailing stop approach, then the potential gains on one trade can easily surpass the losses on the previous 2, 3, or 5 losing trades. This is just one methodology to use in the short to medium term but you can see how it works. Just go back and look at old charts to see how this would have worked mathematically to your benefit. That said, I recommend you develop your own process and once you’ve tested it, stick to it, religiously. The reason I say this is that most people let their emotions take over and that’s why they lose money, by letting their losses run and ultimately throwing in the towel, only for their initial expectations to be proven right in the end.

As for me, I remain long my investments since H2 2015 and the positions I’ve added on dips ever since. But I will be adding more when I see everyone throwing in the towel ‘again’, Banks are neutral or long, Gold and Silver are oversold, the Fed and the US Treasury are on the verge of helicopter money, and real yields have peaked. I don’t need all of these to occur but I do expect them to in the next few weeks or months. Until then, for you investors, remain patient, we may have to endure more pain before the massive gains I expect to come. But these are the conditions before every major rally and time is running out for the Banks imho.