Collapse Of The Paper Gold & Silver Market May Be Close At Hand - Steve St. Angelo

We must remember, a collapse does not happen overnight, but the endgame does. This can be clearly seen in the collapse of the Roman Monetary System: 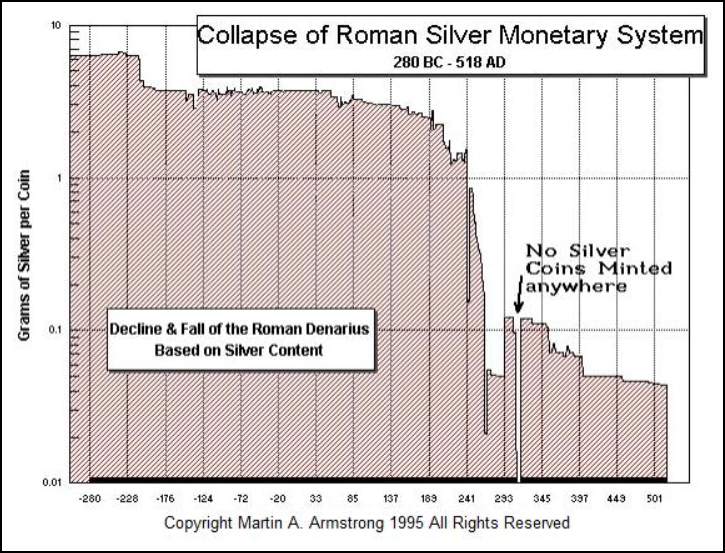 As we can see from the chart above, the devaluation of the Roman coin, the Silver Denarius, started slowly about 50 AD. This continued until the silver value of the Denarius plummeted in 241. This had a profound impact on the population of Rome, shown in the chart below: 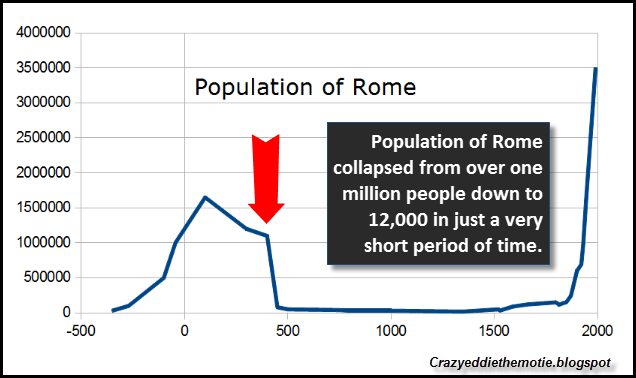 What took place in Ancient Rome, is also taking place in our global modern high-tech world. When Nixon dropped the convertibility of the U.S. Dollar into gold in 1971, a few years later… the gold futures markets started trading. No longer was the world’s reserve currency backed by gold, instead the Dollar was valued against the gold price traded on the futures exchanges.

Number Of Owners Per Ounce Of Registered Gold Goes Exponential

Again, to have a properly functioning futures exchange, there has to be available supply of metal. However, if we look at the long-term trend of Registered Gold inventories at the Comex, something looks painfully wrong here:

The chart shows the total amount of Registered Gold inventories on the top and the number of owners per ounce on the bottom. From 2001 to 2013, the number of owners per ounce of gold trend line was basically flat.. except for a few blips. But, something changed in 2013 when the price of gold was taken down from $1,600 to $1,150 in a short period of time.

As the amount of Registered Gold declined, the number of owners per ounce shot up over 100 by the beginning of 2014. Then the trend line fell and remained flat until the middle of 2015… when all hell broke loose. This was at the time there was a threat of a Greek Exit of the European Union and concern that the broader markets may crash by the end of the year.

Craig at TFmetals Report wrote a good piece describing what may of happened when 73% of Registered Gold inventories plummeted in one day in his article, Connecting The Comex Dots:

1. Once again, the Comex delivery process is shown to be nothing but a Bullion Bank Circle Jerk where a bank takes delivery one month, only to turn around and issue the gold back out the next. Rarely does gold ever actually leave the Comex vaulting system and, today’s action notwithstanding, rarely does it even move from vault to vault.
2. Total Comex registered gold remains at all-time lows. Though some gold has recently been re-classified from eligible to registered as Feb16 deliveries begin, the total Comex registered gold vaults still hold just 145,000 ounces with 3,687 Feb16 contracts still open and standing, representing as much as 368,700 ounces of delivery obligations.

Regardless, if we look at the owners per ounce of gold via the Registered Category, we can see how the trend line has gone exponential. Anything that heads into an exponential trend, doesn’t last for long. This was also true in the Roman Monetary System chart shown above.

Now, what has taken place in the Comex Registered Gold Market, seems to be bleeding over into the silver market.

However, this steadily increased over the year and jumped to 27 owners per ounce when nearly eight million oz of Registered Silver was transferred to the Eligible Category on January 28th: 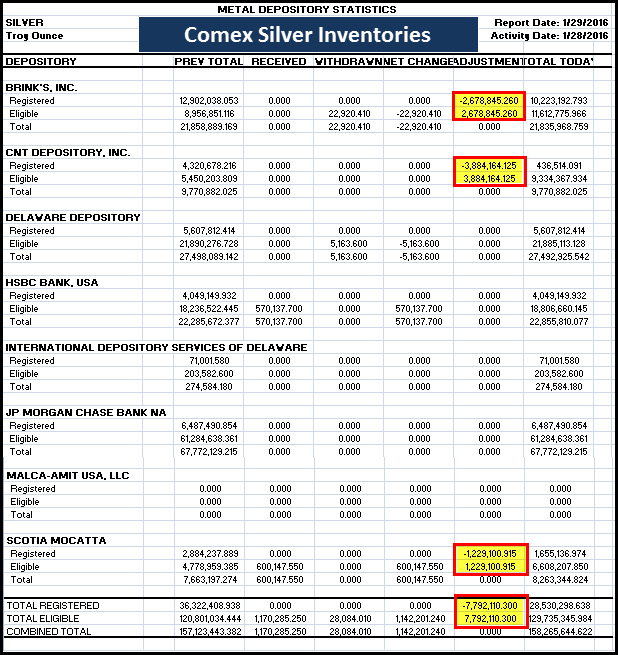 Furthermore, if we look at the long-term Comex Registered Silver inventories we can see some interesting divergent trends: 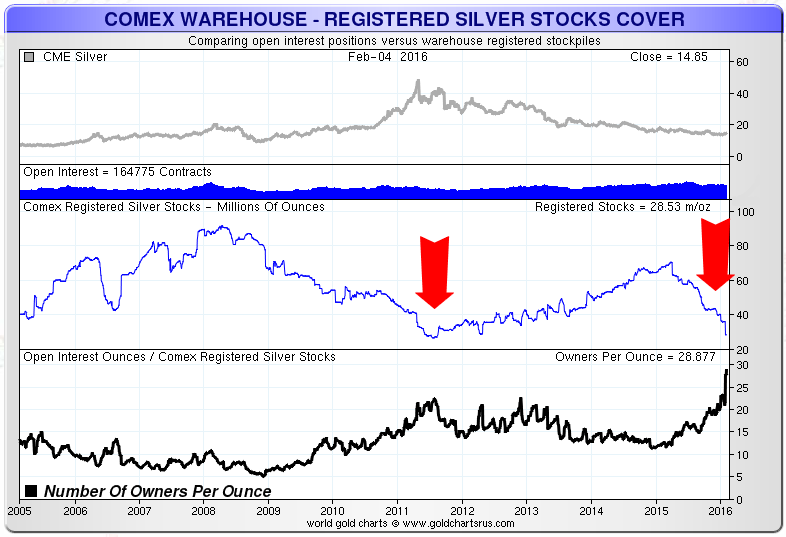 As we can see, Registered Silver inventories began to build after the price of silver hit a record $49 in May 2011 and peaked at 70 Moz at the beginning of April 2015. Then as concern in the stability of the Global and U.S. Markets increased in the summer, record physical silver investment demand pushed wait times for retail products upwards of two months.

Thus, the drain of Registered Silver inventories began in earnest. Now the number of owners per ounce of Registered (Deliverable) is heading towards the 30 figure. While this number isn’t as significant as the Registered Gold’s figure of 250… it has never been this high in more than ten years.

Moreover, there is a divergent trend taking place. When the owners per ounce of Registered Silver went above 20 in 2011, it was due to increased industrial and investment demand as traders feared that the price would continue higher. In contrast, the new record 27 owners per ounce has occurred when the price of silver is now trading 70% lower than its 2011 peak with falling industrial demand.

So, something just isn’t right in the paper gold and silver markets. I believe these charts are indicators that the coming collapse of the paper precious metals markets is close at hand. I am not saying it will happen today, next month or this year… but the trends are heading in an exponential fashion. Again… all exponential trends end in collapse… BAR NONE.

My fear is the collapse of the paper gold and silver futures markets may usher in a NEW DARK AGE. There is plenty of rumor and conspiracy on the alternative internet that the powers that be are certainly planning something to cover up the disintegration of the U.S. Dollar Fiat Monetary System.

In all likelihood, the coming collapse of the economic and financial system will happen virtually overnight. Unfortunately, investors who are still playing Russian Roulette in the broader markets may find out sooner than later, TIMING AN EXIT is folly.

Owning physical gold and silver out of the banking system is the best alternative to the madness that is coming.

John Doe
Reply
Please tell us when all this will happen!
Reply
Leave a Comment

Weekly Wrap Up
1780
Two Steps Forward, One Step Back - Weekly Wrap Up
By Craig Hemke
News
1197
Inflation is Everywhere
By David Brady
News
120
The Fed Further Reduces Its Transparency
By Dave Kranzler