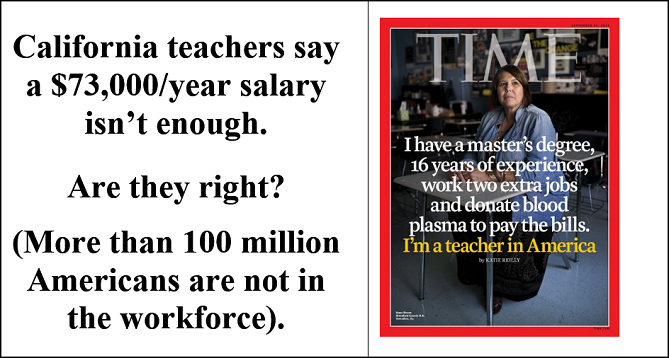 U.S. private sector productivity rose by 2.3% during Q3, according to the Bureau of Labour Statistics, following a massive hike in deficit spending by the Trump Administration.

If each of us produces more each year, we make ourselves richer … but more importantly, through the progressive income tax system, we also make each other richer.

However, longer term, annual U.S. productivity gains have slipped from an average of 2.3% during the seven decades starting in Q4 1948 to just 1.1% in the decade following the start of the 2007 financial crisis.

Worse, there are growing signs that U.S. labour productivity is not just slowing, it’s in a freefall.

Why is productivity collapsing?

The idea that American productivity is collapsing seems ludicrous. This, during a time of an increasingly educated population, exploding technology and communications power, as well as the proliferation of AI, mobile devices and robotized manufacturing processes.

However, a range of forces are pushing in the opposite direction:

• The U.S. Federal Reserve’s low interest rate policies have made it more profitable for businesses to buy back stock than reinvest in technology.

• Bail-outs of large U.S. banks, automotive companies and other key sectors have stifled private sector innovation for a generation.

• America’s seniors are draining productive resources from the economy by collecting pensions and healthcare benefits they never fully funded.

The reason that the collapse is not reflected in the official data is in part due to the fact that the BLS measures only private sector hourly productivity.

This does not reflect the growing drag on potential growth stemming from the increasing resources transferred to the more than 100 million working age Americans who are unemployed, out of the labour force or in jail.

Worse, the BLS calculations rely on the flawed GDP totals produced by the Bureau of Economic Analysis.

As John Williams of ShadowStats notes, the results are likely overestimated, because the deflator the BEA uses does not fully account for the loss in purchasing power in the U.S. dollar—the unit of measure used in its calculations.

The chart below (produced by Williams) shows U.S. GDP growth as measured by official sources.

Using this adjusted measure, the U.S. economy is no bigger than it was two decades ago. Yet America’s population has shot up by 15% since then.

This suggests the country’s per capita productivity has fallen by 0.75 percentage points per year on a straight-line basis since then.

America’s most important work. But are California teachers worth $73,000 a year?

The productivity drain stemming from bloated state, local and federal government spending, which now accounts for more than 60% of U.S. GDP, is particularly troubling.

The inefficiencies are startling.

For example, Time Magazine recently ran an excellent article on how the country’s public-school teachers, like most Americans, have seen the purchasing power of their take-home pay decline.

There is no free market in education. With few effective price signals, California’s central planners are thus unable to determine whether they should raise taxes to increase pay for teachers earning $73,000 a year (plus benefits and a pension plan).

Adding to the complexity is the fact that millions of American college graduates who could teach—at far lower salaries—are underemployed or wasting time doing graduate studies.

America’s freefall in productivity is likely even worse than the estimates provided above.

If those effects—which suggest that U.S. GDP is as much as 30% smaller than experts claim— are included, they could herald a coming slow-motion, Soviet Union-style collapse in the American economy.

Indeed, one of the worst problems in the old Russia-led empire was that sloppy Communist Party data made it impossible to confirm whether problems existed … and if so, where.

alan
Reply
Nice article Peter. I have to point out, you are not digging down to the root causes, but I believe your data - US worker productivity is declining. Reasons: "capture the value" economics that are prevalent in corporate America (which is really international corps, no longer American corps) Over the past 18 years, corps have waged war on, well, wages. As the workers produced more, the "capture the value" brought most of the benefits back to stock holders rather than the workers. Where is the incentive to help a company that at its heart seems to disdain the producer? Therefore workers are demoralized and dis-incentivized. The corps have achieved this scorched earth result with the help of lapdog politicians keeping borders open for illegal labor, massive H1B visa programs, and massive outsourcing. I have a BSEE and MSMSM, and have worked my tail off. Each of my tech contracts of the past 10 years has ended the same way: successful execution, followed immediately by mass layoffs. This happened at Lockheed, Conway, Daimler, CenturyLink, and BJC. So the model is clear: produce and work 80 hours a week with enthusiasm, have your creativity and work seized by the company, go home in a large group being pushed out the door. I embrace free enterprise. But if this economy is what crony capitalism looks like, I see it as the new global feudalism. And it stinks. Best Regards, Alan
(1)
Reply

Judy
Reply
Unfortunately, most of these companies no longer have allegiance to our country, and certainly not to their employees. I remember when companies tried to take care of their employees, and were rewarded by employee loyalty and performance.
Reply

JC
Reply
How is it you suggest that through the progressive income tax system, we also make each other richer."??
Reply
Leave a Comment