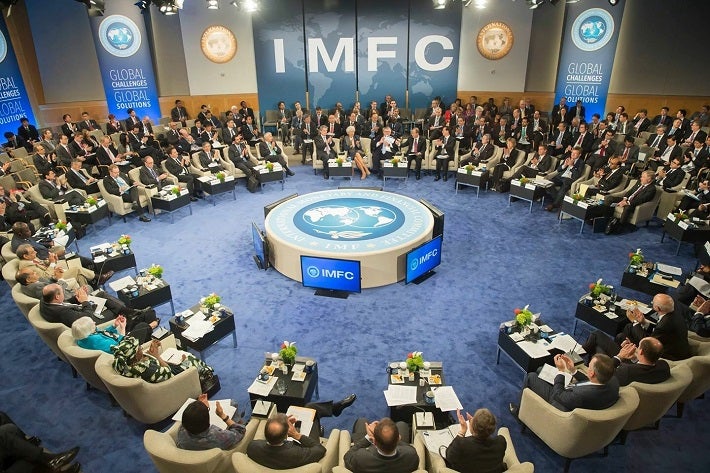 The IMF (International Monetary Fund) or as I like to call them – International Mafia Federation – is showing its true colors and proving beyond question this organization is nothing more than street-corner-thugs in high priced suits.

With the release of this latest working paper on how to enslave nations, steal the remaining sovereignty of the people and the nations they have drawn up plans to force a cashless society upon all the people within IMF member nations.

The International Monetary Fund (IMF) in Washington has published a Working Paper on “de-cashing”. It gives advice to governments who want to abolish cash against the will of their citizenry. Move slowly, start with harmless seeming measures, is part of that advice.

In “The Macroeconomics of De-Cashing”, IMF-Analyst Alexei Kireyev recommends in his conclusions:
Although some countries most likely will de-cash in a few years, going completely cashless should be phased in steps. The de-cashing process could build on the initial and largely uncontested steps, such as the phasing out of large denomination bills, the placement of ceilings on cash transactions, and the reporting of cash moves across the borders. Further steps could include creating economic incentives to reduce the use of cash in transactions, simplifying the opening and use of transferrable deposits, and further computerizing the financial system.

The private sector led de-cashing seems preferable to the public sector led decashing. The former seems almost entirely benign (e.g., more use of mobile phones to pay for coffee), but still needs policy adaptation. The latter seems more questionable, and people may have valid objections to it.

De-cashing of either kind leaves both individuals and states more vulnerable to disruptions, ranging from power outages to hacks to cyberwarfare. In any case, the tempting attempts to impose de-cashing by a decree should be avoided, given the popular personal attachment to cash. A targeted outreach program is needed to alleviate suspicions related to de-cashing; in particular, that by de-cashing the authorities are trying to control all aspects of peoples’ lives, including their use of money, or push personal savings into banks. The de-cashing process would acquire more traction if it were based on individual consumer choice and cost-benefits considerations. Source

It doesn’t get much clearer than that – if the people resist, simply change the rules and, as we have stated time and again, simply enact a new law that the majority of people will accept and the remaining 3-5% will be forced into enslavement with the rest.

Let’s break it down a little so the picture is as clear as possible.

Step one – The de-cashing process could build on the initial and largely uncontested steps, such as the phasing out of large denomination bills, the placement of ceilings on cash transactions, and the reporting of cash moves across the borders.

Strip out, for example, the $100 bill from the U.S. economy. This would eliminate more than half the cash value in circulation with one stroke of the draconian pen.

Next, as France and Spain have already done, and most of the European Union have cash transaction limits – set a limit, for example, transactions larger than$1,000 must be made using electronic means or have a bank involved at some level, e.g. cashier check so their is a record of the transaction for tax and tracking purposes. The good news is, Germany attempted to set a $5,000 euro cash transaction limit and the people revolted.

Finally, make it almost impossible to get cash out of your country and into another. In the U.S. you are required to declare more than $10,000 cash moving across the border and my guess is this suffer a substantial cut.

Another handy tool the criminals are planning on using is to have, for example, “big-box stores” to simply no longer accept cash “for your safety” of course. By implementing this type of policy change the government is not seen as the ‘bad guy’ but a much more friendly “retail outlet” looking out for your safety and the safety of their employees. One question – when was the last time an armed robbery occurred at any big box store world wide? Criminals are not so stupid as to attempt to rob a big-box store due to the sheer volume of cameras on the grounds and inside the stores.

Once these the steps are in place, it makes it much easier to get people to accept financial enslavement as a “convenience” and “for your protection and safety” – “for the children”.

Note, that the author is not talking about unreasonable objections and imagined disadvantages: He does count it among the advantages of de-cashing in the very next paragraph that personal savings are pushed into banks and he also does count total control of all aspects of financial life under the pros, as in the last sentence of the last quote below.

“As de-cashing gives incentives to economies’ agents to convert their currency in bank deposits, the deposit base of the banking system will increase, which can help reduce the lending rates and expand credit.” Source

As the criminal banking cabal becomes more desperate to steal our remaining wealth they are devising more devious ways of doing it. Soft-sell the people into their own enslavement instead of forcing them. The past few decades we have been treated just a step above cattle, now the gloves seem to be coming off and the banking cabal no longer cares that we can see their crimes and their true colors.

You can read the entire – pdf that will download to your computer – IMF plan to financially enslave the planet by clicking here.


The author is not affiliated with, endorsed or sponsored by Sprott Money Ltd. The views and opinions expressed in this material are those of the author or guest speaker, are subject to change and may not necessarily reflect the opinions of Sprott Money Ltd. Sprott Money does not guarantee the accuracy, completeness, timeliness and reliability of the information or any results from its use.

Rob Atkinson
Reply
Your IMF-cashless article is correct. The worst part is 98% of society will walk willingly toward such a system. The stupid people deserve what they get. Too bad the 2% of us must also get "caught up in the same net".
(2)
Reply

R
Reply
Kaiser Permanente Pharmacy retail counter has one line for cash and calls out "anyone not paying with cash?" and takes them first !! as of 4-1-17
Reply

Rory Hall
Reply
Unfortunately, Rob, this is already happening and has been happening - it just hasn't been put together in such a manner.
Reply

Paul
Reply
If you want to see how a cashless society works watch the 1985 movie 'Brazil'.
Reply

Stone Age
Reply
Education is a must. Not indoctrination, but education about what the masses believe cash is. Fact is, it's NOT what they think it is and the IMF et al has every right to keep track of their money. After all, it's THEIR money. Used by individuals through a "franchise" contract that we may opt out of. Other than the legal tender laws that make FED notes and other Central Banking notes of various countries, worth anything. The law says a licensed business SHALL ACCEPT THEM. This is the very reason Bitcoin was developed. Yes, there are challenges with new tech. Especially when it is accepted as widely as Bitcoin et al is and will be. So we must educate our children the real truth behind the creation of the federal reserve and the Central Banking system and the good and bad of that system as opposed to the free market of something in limited supply that cannot be counterfeited.
Reply
Leave a Comment