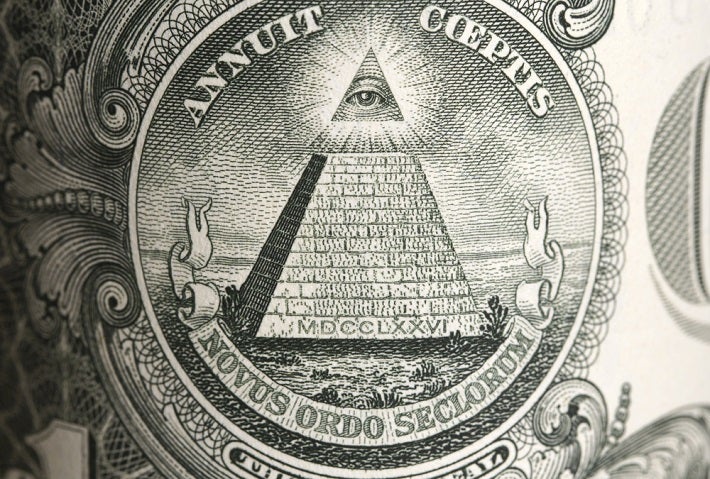 There is going to be a massive economic cataclysm across (at least) the Western world, and it will include horrific crashes in a number of bubble markets. Not only has this been explained often to regular readers, but astute individuals will have easily drawn this conclusion on their own.

The fundamental reasons for this upcoming Crash are as numerous as they are troubling:

Along with the fundamental reasons why an economic Armageddon is both inevitable and imminent, we have the practical reasons for reaching this conclusion:

Above the obedient stooges in Western governments is the financial crime syndicate known as the One Bank . While the focus of its “business” are the criminal operations of Western Big Banks, some of its other more prominent tentacles include the Corporate Media, Big Oil, Big Pharma, and Big Agriculture. This is just a portion of the 40% of the global economy which it currently controls .

Why do we have bubble-and-crash cycles? With its manipulative Trading Algorithm (so-called “HFT trading”), the One Bank can now march all markets to ludicrous extremes beyond the imagination of most of us – at least temporarily. Why not keep pumping these bubble markets higher and higher?

The further that the One Bank pushes/pulls prices away from rational levels, the more financial and criminal energy that is required to both make that move and then maintain it. The Law of Diminishing Returns is clearly at play.

Far more profitable to march markets higher relatively quickly and relatively briefly, crash them back down, and then reset the cycle of crime. This is true because as the creator of these “cycles” the One Bank is always able to place its own (crooked) bets first.

It is therefore a simple matter of profit that dictates that the Next Crash must be an imminent event . However, readers have heard this before. The Next Crash was originally held out as an event likely to occur in the late spring of 2016 – as replicating the pattern of the previous two bubble-and-crash cycles.

Now here we are marching through the spring of 2017, and readers are once again hearing the word “imminent”. Why heed this warning? Signs and portents.

Different readers will attach differing degrees of importance to these factors, so they are presented in no particular order – except for the first.

What can we say about Donald Trump? He’s the least-qualified person to sit in the Oval Office in the modern history of the United States. He’s an egomaniac. He often speaks and acts without thinking. He’s a boorish, bigoted, opinionated bully.

He has spent roughly half of his first four months in office threatening trade wars with the U.S.’s “friends” (for lack of a better word), and the other half of the time threatening military conflict with rivaling nations. Syria, North Korea, even Russia and China: none have been spared the potential Wrath of The Donald.

Recent bubble-and-crash cycles have been timed to blame an outgoing U.S. regime as the principal culprit for the Crash, allowing the other half of the U.S.’s Two-Party Dictatorship to retain a Teflon coating in its first term in office. However, The Donald has just been elected, meaning the old pattern is no longer operative.

This suggests that (unlike the last two bubble-and-crash cycles) the Corporate Media will not have the excuse of calling this Crash an economic event. Three more years of Donald the Economy-Killer would not bode well for Trump, the Republican Party, or its Masters in the One Bank.

How about a war? Think that The Donald might be able to do a good job of creating a nice, big war, pushed and pulled by the “advisors” who guide all of his presidential actions? Assuming he doesn’t blow up the world first (literally), who better to blow up the U.S. economy – and much of the global economy along with it?

Anyone looking for “signs and portents” need look no further than U.S. equities markets. The Dow just broke 20,000. After crossing and re-crossing the 10,000 barrier on numerous occasions, the (much-substituted) Dow finally has its “double”.

The NASDAQ just broke 6,000. Finally, more than 15 years after the bursting of the dot-com bubble, the NASDAQ can actually boast of a higher milestone under its belt – temporarily. There is nothing left to accomplish in U.S. equity markets before the raping-and-pillaging begins.

After crude oil prices rose for several weeks starting in the second half of March, prices have suddenly reversed lower, breaking through recent support to the downside.

If The Donald has been instructed by his Masters (and advisors) to start a big, new war, then certainly his Masters will want the price of crude to be sitting near/at some rock-bottom level. Wars are expensive. War machines guzzle vast quantities of petroleum – especially modern war machines.

If The Donald envisions some glorious military triumph attached to his name, like some modern day, lesser Napoleon, he’s not going to get it by pressing The Button. Russia and China have plenty of nukes of their own, and despite all of the U.S.’s much-hyped (and ultra-expensive) “missile defense” technology, the U.S. has no defense against several weapons in Russia’s nuclear arsenal.

If there is a war coming (and the odds don’t look good), it must be another conventional war, or the Next War will be humanity’s Last War. Fighting that war requires (among other things) keeping the price of oil as cheap as possible for as long as possible.

Analysis of other real estate markets in the Western world requires someone with more regional expertise. However, with respect to North America’s real estate market (i.e. Canada and the U.S.), this market is ripe for implosion.

In the U.S., after enormous hyping and pumping, the U.S. real estate market has climbed all the way back to an average level as measured by historical standards. This means it’s now high enough that crashing those real estate prices would lead to lots of the bankers’ favorite hobby: foreclosures.

In Canada; the housing bubbles in our major urban centers (Toronto and Vancouver) are not merely “ripe”, they are thoroughly rancid. Prices have spiraled well beyond any sane metrics, with Toronto now catching up to Vancouver in the insanity derby after the West Coast’s early lead.

Ontario and B.C. have now taken steps to prick their own housing bubbles. It’s not possible to “prick” bubbles this unstable and this bloated. Unless the bankers choose to flood significant quantities of their own capital into these markets to overcome the regulatory drags, then only one word is in order. Ka-boom!

Referring to the U.S. economy as a train-wreck does not fully do justice to the hollowing-out and crippling of one of history’s great economic engines. There are so many “signs and portents” indicating that this train-wreck must soon be acknowledged that no comprehensive list is possible.

However, for what is now a self-declared “consumer economy” this headline certainly qualifies as an ominous sign:

Retailer Are Going Bankrupt at a Record Pace

The liars-and-shills in the Corporate Media continue with their happy-talk about “the strong U.S. economy”. But strong consumer economies don’t see retailers going bankrupt at a record rate. Soon even the blind/deaf/dumb Sheep who consume the Corporate Media’s lies are going to notice this inconsistency. D-Day (detonation day) must occur before that realization broadly penetrates.

A commentary published on May 1 warned readers that “gold and silver must go down before they can go up (much higher).” That commentary now appears somewhat prophetic given that gold and silver prices have suddenly fallen sharply.

In the Crash of ’08, the bankers actually began pushing gold and silver markets lower just before staging their broader crashes in markets and our economies. U.S. markets, the U.S. economy, and real estate markets are now shrieking “the End is near.”

The price of oil is now being primed for a potential war. The United States has a Berserker in the White House capable of laying waste to all around him with a moment’s notice.

Gold and silver prices should be going straight up right now. Instead they have gone almost straight down for the past week.

Want one more sign? Eighty-six-year-old Warren Buffett is now sitting on a mountain of vampire dollars which totals at least $85 billion. What are you waiting for, Warren?