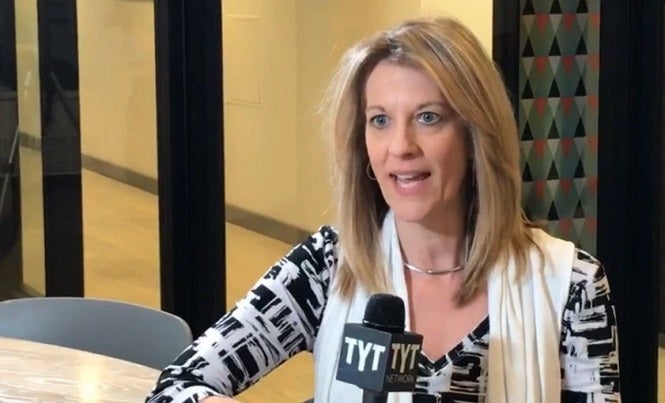 With Americans taxed to the hilt and refusing to finance greater deficits, Sanders’ vulnerability remains his inability to address how those initiatives will be paid for.

No problem, says Stephanie Kelton, a professor at Stony Brook University; the U.S. government can simply print the money.

As strange as it may seem, Kelton’s idea, broadly known as Modern Monetary Theory—which has been called “ The biggest idea in Washington”—has broad appeal. That’s particularly true of interest groups that are well-positioned to benefit from government largesse.

However, bypassing traditional monetary policy distribution channels has huge implications for gold and, more importantly, for productivity and for freedom itself. We’ll get to that in a second.

But first, we need to take a hard look at this new theory, which appears to deliver bread from heaven.

“If I had a printing press”

Kelton’s key message regarding how progressives should talk about money, debt, and taxes centers around what she calls the “taxpayer myth.”

Kelton, who first came to public attention during her time as former (Democratic Party) chief economist for the Senate Budget Committee, argues that the government doesn’t need to tax in order to spend, but it may need to do so to offset inflation.

Extending a Ponzi: An idea whose time has come

To understand the irresistible allure of Stephanie Kelton and Modern Monetary Theory, you need to understand where we are in the economic cycle.

During the past four decades, American system-wide taxes, borrowing, and government spending have been growing faster than GDP. As any first-year economics student could tell you, it’s a classic Ponzi Scheme.

Worse, professional economists in government, banking, and academia—whose chief role is to justify transfers of funds to their respective organizations—won’t breathe a word of just how dangerous things are, because their jobs are reliant on the current system.

The immediate problem is that with consumers, businesses, and governments borrowed to the hilt, the debt-growth model—which for the past decade has been barely keeping the economy afloat—is reaching its limits.

Worse, Americans are so hooked on government stimulus that experts believe they would be unable to endure even a mild recession, let alone the decade-long depression that would be needed to clean out the system.

In America’s fantasy economy, government money-printing thus emerges as an ideal solution to prolong the Ponzi.

Not Modern. Nothing to do with money. Not a credible theory.

The most important reason that Modern Monetary Theory is being discussed is Kelton herself. She is increasingly being courted by everyone from academia, to the Democratic Party, to left-wing media such as TYT and even (you guessed it) Deep State plutocrats.

However, the former Sanders’ campaign advisor’s empathy, talent for bonding with audiences, and communication abilities are pushing ideas into public debate that aren’t that new.

To put it bluntly, Modern Monetary Theory isn’t modern, has nothing to do with money, and isn’t a coherent theory.

MMT is broadly a synthesis of ideas that go back to German economist Georg Friedrich Knapp’s State Theory of Money, which John Maynard Keynes drew on in Treatise on Money and his general theory.

Despite its name, MMT also has little to do with money, which—as Aristotle defined it—consists of units of exchange that have value in themselves and which constitute a store of wealth.

The American government pointing a gun at citizens’ heads and forcing them to provide it assets in exchange for depreciating, and ultimately worthless, paper, in fact requires the abolition of private money.

Because few people would use government fiat if they had a choice.

That’s because while on the surface MMT can be implemented and sustained if resources are allocated properly and inflation is kept under wraps, past experience—ranging from the Soviet Union to Cuba, Zimbabwe, North Korea and Venezuela—suggests this is easier said than done.

This same pattern would also almost certainly occur with money-printing, particularly in a highly over-stimulated economy such as America’s.

Finally, as Ludwig von Mises demonstrated nearly a century ago in Socialism: An economic and sociological analysis , socialism—which is the inevitable end result of Modern Monetary Theory—can’t work, because without the price signals given by sound money, even the smartest bureaucrats don’t have the information they need to effectively allocate resources.

For example, even today the two biggest stimulus drivers that are keeping the U.S. economy afloat— increases in unfunded liabilities and the “Fed Tax” (massive transfers caused by interest rate suppression )—don’t appear anywhere on the government’s books.

One woman … worth dozens of men

However, the best argument against Modern Monetary Theory and the full employment it is supposed to promote is Kelton herself.

During a time when economics is bemoaning the lack of women in the profession, Kelton—whatever you think of her ideas—has done more to advance the debate about the future of economics among the general public than the dozens of other high-level male MMT proponents and the thousands of other women who decided not to become economists (and are now presumably employed in more useful professions) could have—combined.

That’s hardly unusual. As any business owner could tell you, one top-performing employee can easily produce more that dozens of ordinary folk.

More important though, many people are unemployed for a reason: because their contributions to organizations they join can often be negative.

Thief-onomics: the other guy can steal back

For example, Modern Monetary Theory overlooks the fact that when governments “effectively and fairly” allocate wealth stolen through taxes or fiat currencies, they have to simultaneously confront the people they stole it from.

As such, America’s best minds—including Kelton herself—are today concentrated in professions such as tax law, banking, accounting, and lobbying, all of which are driven by one motivation: to steal back what governments took from them in the first place.

Indeed, implementing Modern Monetary Theory would also generate a severe reaction from ordinary Americans who struggle to preserve their wealth from government confiscation.

This in turn would also surely force a ban on cash and crypto assets, coupled with the eventual implementation of capital controls.

Wait till the guy with the orange hair hears about MMT

However, the most surprising unintended consequence of MMT is that Kelton—as she herself has acknowledged—may have prepared the ground for a vast expansion of the money supply, led by the Republicans themselves, who will use the cash to advance their own interests.

Because when the guy with the orange hair in the White House—who already leads the biggest spending machine in U.S. history—figures out that governments can just print the money they need, there will be no way to shut off the tap.

Already, key Trump Administration advisors have managed to get a firm grip on a now-compliant Federal Reserve chairman Jerome Powell. In fact, the nominally independent central bank has already stated that Quantitative Easing (money printing) is now a permanent feature of its policy.

Far more drastic moves are in the offing.

These in turn will drive a continuing vicious cycle of collapsing U.S. productivity and in median, inflation-adjusted wages, coupled with the appearance of growth as measured by misleading GDP figures.

We don’t give investment advice regarding gold or anything else.

But with America in the midst of an intractable, slow-motion, stealth, Soviet-style economic collapse, we will give storage advice.

Those who own the yellow metal … should bury it six feet deeper.

Girish
Reply
You have only picked bad side of MMT. MMT also envisages balanced trade which would be achieved by Balanced trade and currency movement would achieve that. This will control inflation and allow interest rates to rise to normal level.
Reply
Leave a Comment