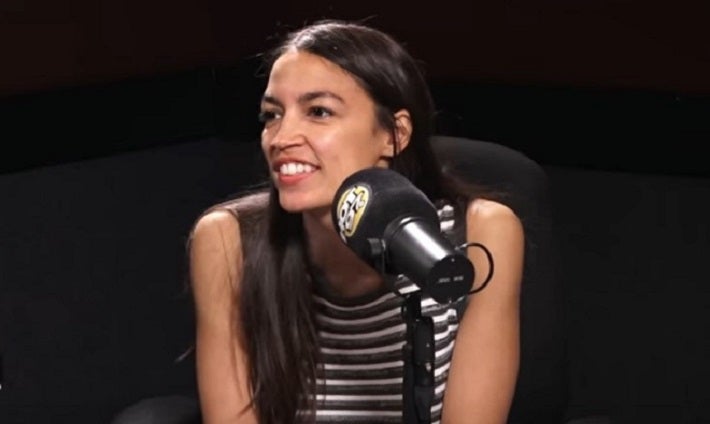 The telegenic 28-year old ex-waitress, who lives in a one-bedroom Bronx apartment, defeated Joseph Crowley, a 20-year incumbent and one of the Party’s most powerful members.

Ocasio-Cortez’s win has given particular hope to American youth. Polls suggest that millennials, like generations of youth before them, broadly support a socialist agenda.

However, there are growing signs that increasing government involvement in the economy is bad for Americans, particularly its youth.

Ocasio-Cortez’s unlikely win comes on the heels of growing momentum in the socialist movement.

Bernie Sanders almost won the Democratic Party’s presidential primary in 2016 by running on a socialist agenda. His platform (which Ocasio-Cortez supported) included government-financed universal medical care and tuition, as well as a $15 per hour minimum wage.

Indeed, even Republicans are moving to the left.

The nominally conservative Trump Administration increased public spending, the deficit, taxes on imported goods and (through its trade policies) has vastly boosted government control of the economy.

Lies my teacher told me

The bad news for Americans, particularly youth, many of whom have been badly misinformed about socialism by unionized teachers in government-financed schools, is three-fold.

First, increasing the size of the public sector beyond a certain point makes everyone poorer. The world saw this in dramatic fashion after the fall of the Soviet Union, when all of the country’s bullish economic data turned out to be false.

Countries that were split in two during the Soviet era, such as Germany and Korea, were particularly illustrative. In both cases the zones that had less government involvement did better.

Secondly, there are strong signs that the American government, which has been growing faster than the economy for more than three decades, is on a similar path.

A free currency market would have checked government spending, which, when accruals are included, now exceeds 60% of the US economy,

However, since the abolishment of the gold standard, governments, through a variety of mechanisms, can now effectively print whatever money they need.

Thus, thirdly, the resulting lack of a stable unit of account now makes it almost impossible for observers to measure just how bad the situation is.

America’s national pastime: stealing from each other

Younger Americans, who don’t vote in large numbers and have few inside connections, appear particularly ill-suited to succeed in a socialist state.

This is due in part to socialism’s very nature, which rewards special interest collectives who pressure governments for funding, the creation of jobs with above-market wages, and legislation which enables favored professions to extract “rents.”

Unlike free markets, which rely on voluntary exchanges, governments thrive on coercion, ultimately at gunpoint. In that sense taxes are, to a large degree, theft.

Using government to steal from each other has thus become America’s largest economic activity.

A pernicious effect on the national character

This leads to a fourth result of socialism, which is hardly studied at all: its pernicious effect on the national character.

That didn’t matter so much a century ago when communism was first implemented. Back then most people were unskilled workers or farmers who could be muscled around.

But in an information economy, in which many workers know more about their jobs than their bosses, this is highly dangerous.

Policy makers haven’t yet realized that it isn’t a good idea to steal half of their doctors’ salaries.

Stealing half the salary of your accountant, the guy who sets your economic policy or the scientist who advises you about climate policy isn’t too smart either.

Socialism thus leaves American youth at a severe disadvantage, because income distribution only works if your special interest group can steal more from others than they steal from you.

For example, if you vote to tax businesses, but those businesses raise prices by a higher amount, you may be worse off.

The trouble is that when government tax revenues are divvied up among special interests, kids come last. Older Americans get the lucrative government jobs. They then implement seniority laws and credentialism requirements to keep others out.

Government spending, much of which is financed by borrowing, also disproportionately benefits seniors. Kids get stuck with the debts.

Are American youth being scammed?

Critics rightly argue that the young come last under any form of government.

American youth can thus be admired for advocating a sharing society, which socialism is supposed to foster.

However, they’d do well to question their teachers and consider a sentiment famously misattributed to Winston Churchill.

JJ
Reply
"Socialism is a philosophy of failure, the creed of ignorance, and the gospel of envy, its inherent virtue is the equal sharing of misery". The only quote attributed to W.Churchill that I really like.
Reply
Leave a Comment