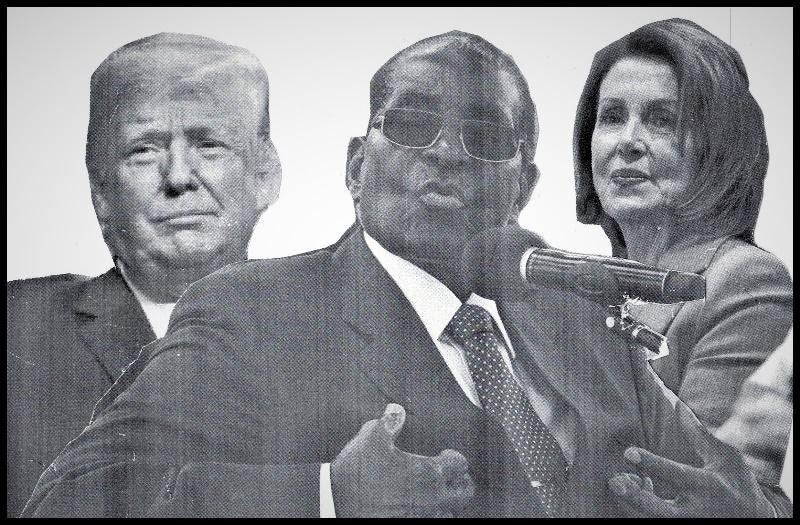 Giving out the cash will be loads of fun. Politicians love to do that. Paying for it will be a little tougher.

Raising taxes is impossible. If governments raised taxes every time there was a war or a crisis, voters wouldn’t let them start so many.

Borrowing is also out. No one will lend money to a deadbeat.

But Trump has a creative solution: America can simply print the “infinite” amounts of cash that will be needed.

The trouble is that printing money in order to finance current expenditures is like taking drugs: it takes more and more to achieve the same effect.

So it seemingly makes no sense that Trump would apply the same solutions for rich America that were adopted by the late Robert Mugabe in Zimbabwe, which has become famous for $100 trillion bills, and where inflation even today is running at 500% and the only thing that seems to be working is a few banana farms .

The idea that Robert Mugabe would emerge as America’s monetary policy mentor was first suggested as a joke nearly a decade ago by Marc Faber, publisher of the Gloom, Boom & Doom Report.

But politicians, even disparate figures like Trump and Mugabe, are a unique breed and in many ways have more in common with each other than with the people they lead.

It thus makes sense to compare the challenges that Trump inherited with those that Mugabe faced.

At first the results in both countries looked OK.

Zimbabwe emerged from the 1980s slightly better off in GDP terms, but poorer when the corrosive effects of the accumulated debts were included. Once the 1990s hit, the country began to collapse at a steadily increasing pace.

America, which has been mirroring Mugabe’s “borrow and spend” economic policies since the 1980s, has had similar results.

However, the deterioration has been slower. On paper America’s economy continues to grow, though it is taking larger amounts of debt each year to maintain the mirage.

Indeed, when adjusted for a realistic deflator and accumulated system debts, the U.S. economy has been shrinking for more than a decade, productivity has been collapsing , and according to some experts, it is in worse financial shape than Russia or China.

The fact that Trump and Mugabe would funnel most of their countries’ tax dollars to parasitic elites and favorite interest groups is hardly a surprise.

Kleptocracies (whether monarchies, socialist utopias, or even democracies) are the planet’s natural form of government.

Insiders have long learned to camouflage this fact by throwing out the occasional small-but-highly-visible bone to the public ($1,000 checks anyone?).

For example, the government’s latest bailout package amounts to $2 trillion, or about $15,000 per household.

How much of that are you getting?

An interesting phenomenon of the Zimbabwean and American Economic Models relates to the broad support that Trump and Mugabe got from their countries’ economists.

This is hardly surprising.

Economists are generally fine, nuanced individuals. But as a group, they are best described as “apologists for theft.”

As Murray Rothbard noted in An Austrian Perspective on The History of Economic Thought , government confiscation always precedes the justifications, which inevitably follow in the form of some economic theory or model.

What most distinguishes Trump and Mugabe is that both had to resort to unsustainable accelerations in money printing to finance the growing demands of a public that could no longer be financed by taxation and borrowing.

That said, there are some unique aspects to Trump’s challenges.

The fact that unlimited money printing is illegal under current legislation isn’t a particularly big deal. Governments love to innovate.

The Federal Reserve will simply mimic Enron (one of the largest frauds in U.S. history) by setting up “special purpose vehicles” to keep the transactions off the books.

As noted above, like cocaine use, it takes increasing amounts of spending to generate the same high.

For example, the current U.S. $2 trillion emergency package is three times larger than the 2008 bailout.

Adopt the gold standard or learn to love bananas

The consequences of unrestricted money printing are well known.

There is nothing as corrosive as unearned wealth. Giving money away is worse than burning it—because if you burn it, you only lose it once. But if you get people used to being bailed out, they come back for more. Every time.

Countries that do so gradually slip into a death spiral.

America—like Zimbabwe, Venezuela, and the Soviet Union before it—is well on the way.

Today the world’s richest country can’t take four weeks of paid vacation to battle COVID-19 without sending the economy into a depression.

The key takeaway is that money printing is a hidden tax.

The process leaves voters with no ability to track how much government is stealing and handing out.

It thus provides no effective checks on the actions of politicians.

As Alan Greenspan noted more than sixty years ago: “In the absence of a gold standard, there is no way to protect savings from government confiscation.”

Americans have a choice. They can return to sound money, or they can follow Robert Mugabe and Zimbabwe.

It they choose the latter, they’d better learn to love bananas.